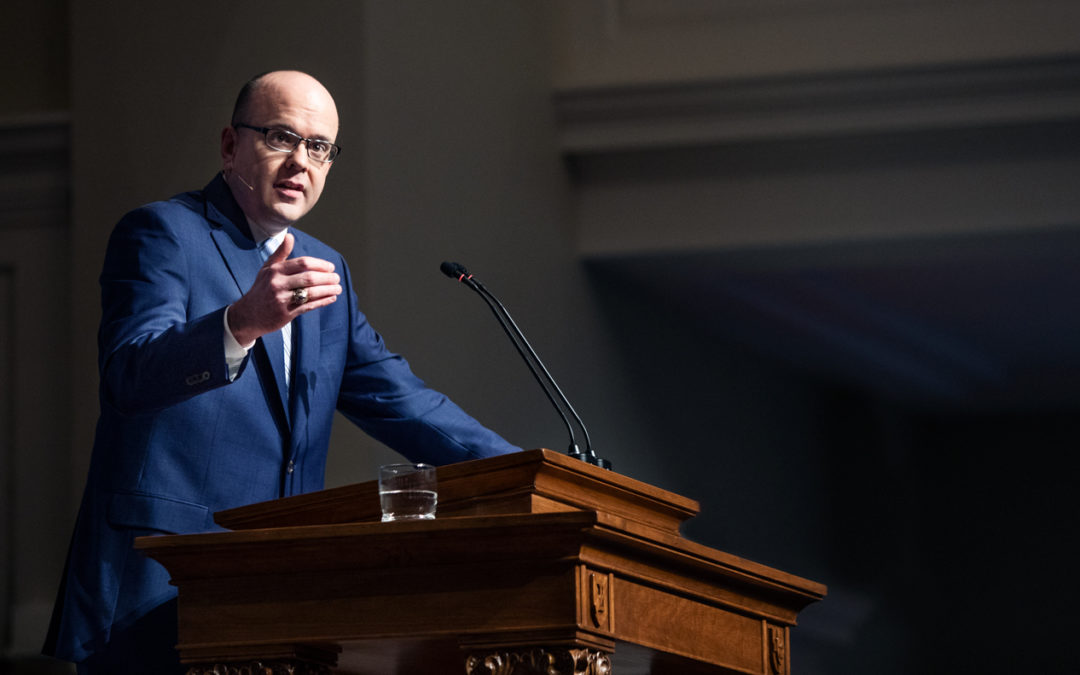 Greenway, 41, has served in many denominational leadership roles, including vice chairman of the Evangelism Task Force (2018), president of the Kentucky Baptist Convention (2011-2012), trustee and board chairman for LifeWay Christian Resources (2005-2015), and current chairman of the SBC Committee on Order of Business.

The search committee will bring Greenway’s nomination to the full Board of Trustees for a vote during a special called meeting to be held on February 26–27, 2019. If elected, Greenway will become Southwestern Seminary’s ninth president.

“We came to know Adam Greenway as a man of impeccable character who demonstrates kindness and humility in his dealings with others, a leader who surrounds himself with talented people and allows them to work within their giftedness, a bridge builder in the Southern Baptist Convention, and a true scholar with a heart for missions and evangelism.”

Appointed in August 2018 by Kevin Ueckert, chairman of Southwestern Seminary’s Board of Trustees, the nine-member search committee was comprised of men and women from diverse racial, cultural, and geographic backgrounds. The committee reviewed dozens of recommendations, resumes, and questionnaires from a diverse field of candidates.

In a series of interactions with the search committee, including nearly a dozen hours of face-to-face meetings, Greenway presented a compelling vision for the future of Southwestern Seminary. Possessing a rich history of “scholarship on fire,” Southwestern Seminary can once again be an institution that is known for providing the highest quality theological education to all Southern Baptists, Greenway told the committee.

“Carla and I are deeply humbled and honored by the invitation of the presidential search committee to be considered to ‘come home’ to Southwestern Seminary,” Greenway said. “From the time I first enrolled as a student there now twenty years ago this year, my life has been indelibly impacted by Southwestern. I was blessed to study under a faculty that included Roy Fish, Malcolm McDow, James Leo Garrett, Bill Tolar, Curtis Vaughn, and more—some of the greatest professors ever to teach at any SBC seminary.

“Ever since that first moment I was pronounced a ‘Southwesterner,’ I have felt a deep and abiding love for my alma mater. I believe the best days of Southwestern Seminary are ahead of us and I am committed to training and sending out the next generation of God-called men and women for gospel-service around the world.”

A native of Frostproof, Florida, Greenway is a 1998 graduate of Samford University who earned a Master of Divinity degree from Southwestern Seminary in 2002. He went on to earn a PhD in Evangelism and Apologetics from Southern Seminary in 2007. In 2016, Greenway completed a Master of Nonprofit Administration degree at the Mendoza College of Business at the University of Notre Dame.

As a student on Seminary Hill, Greenway met his wife Carla. They have been married since 2003 and have two children, Wade (9) and Caroline (3). Carla Greenway, a 2002 Master of Arts in Christian Education graduate of Southwestern Seminary, has served several Southern Baptist churches in children’s and family ministry roles, as well as in Christian school administration.

“Adam’s best quality is his wife, Carla, a genuine, humble lady who loves to serve others and serve the church,” said Paul Chitwood, president of the International Mission Board. “Both Adam and Carla love the Lord and walk in integrity before Him. Should the Lord call them there, the Great Commission and the local church will be front and center at Southwestern Seminary and I will be praying, ‘Thank you, Lord, for answering my prayers and the prayers of Southern Baptists by giving us one of your best to lead us!’”

A proven track record of success

Greenway is widely known in Southern Baptist circles as a committed evangelist, serious scholar, and proven administrator. He has co-edited two books—The Great Commission Resurgence: Fulfilling God’s Mandate in Our Time and Evangelicals Engaging Emergent: A Discussion of the Emergent Church Movement—and has contributed to several others.

“I enthusiastically support the decision of the search committee to nominate Dr. Adam Greenway as the next president of The Southwestern Baptist Theological Seminary,” said R. Albert Mohler, Jr., president of The Southern Baptist Theological Seminary. “I’ve had the joy and privilege of working with Adam Greenway for well over a decade now. He is a remarkable Christian with a demonstrated heart for ministry, a clear vision for theological education, and he represents all of the convictions and character that Southern Baptists look to in a national leader.”

Before his time as dean of the Billy Graham School, Greenway served in other administrative roles at Southern Seminary, providing him with a unique set of experiences in academic administration from which he will be able to draw in this new role. In his interviews with the search committee, Greenway demonstrated an unparalleled grasp of the complexities involved in running an academic institution, the committee noted.

As a leader in the Southern Baptist Convention, Greenway has a long history of service. At age 34, he was elected chairman of LifeWay Christian Resources’ Board of Trustees, becoming the youngest trustee chairman in LifeWay’s history. He has also served as an assistant parliamentarian for the Southern Baptist Convention since 2016, vice-chairman of the 2017 SBC Committee on Nominations, and is the current chairman of the SBC Committee on Order of Business.

“My heart resonates and rejoices with the news that Dr. Adam Greenway is being recommended for the Presidency of my alma mater, Southwestern Seminary,” said O.S. Hawkins, president and CEO of Guidestone Financial Resources. “He is a Southwesterner, one of us. He is intellectually astute, straight as an arrow theologically, and has a hot heart for evangelism and missions. I believe God has been preparing him his whole life for this world-impacting assignment and I believe the Lord is now preparing all of us for great and God-honoring days ahead at our beloved Southwestern Seminary.”

In addition to his denominational service, Greenway has served as pastor and/or interim pastor of a dozen churches across Kentucky, Illinois, Indiana, Ohio, Texas, and Florida.

“For the past 16 years, I have had the privilege of seeing Adam Greenway’s life and ministry up close. I was his pastor, served under him as a professor, worked closely alongside of him in our roles with the Kentucky Baptist Convention, and drove his son to school every morning in our carpool,” said Chitwood, former executive director-treasurer of the Kentucky Baptist Convention. “Adam is one of the most intelligent persons I know, preaches with the passion of a frontier evangelist, is thoroughly Southern Baptist, believes in and models Cooperative Program giving, and has a proven track record of success as a leader.”

Immediately following the adjournment of the Board of Trustees meeting on February 27, a press conference will be held on the campus of Southwestern Seminary.