History of the Broadus Gavel 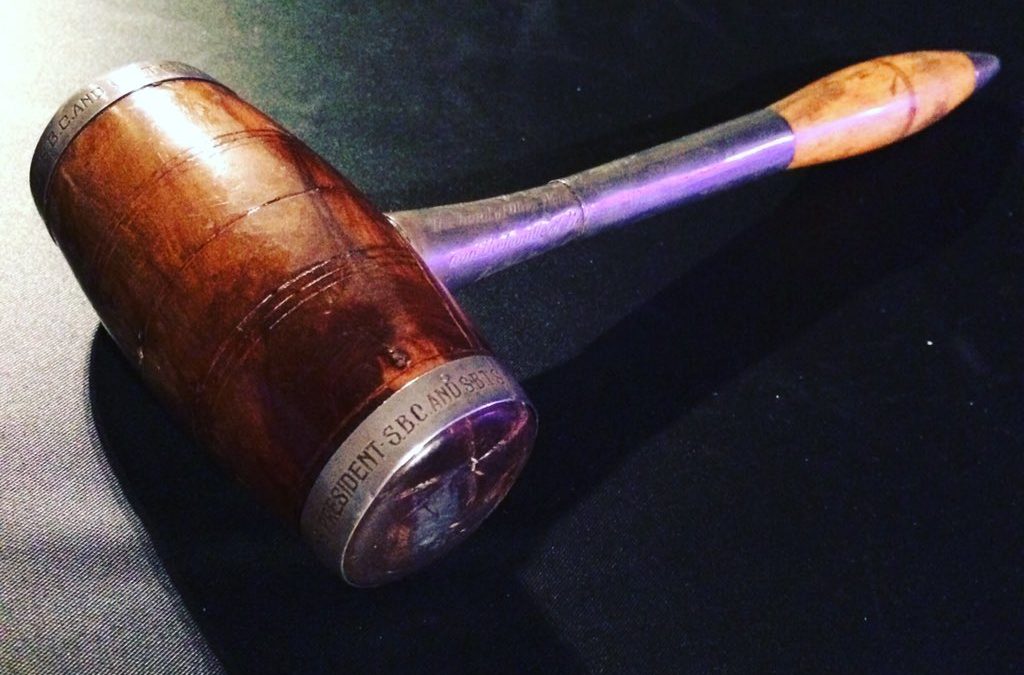 The Southern Baptist Convention has been given multiple commemorative gavels over the years, but one has been used the most. The Broadus Gavel has been used continuously at Southern Baptist Convention annual meetings since John Broadus 1872. In 1939, SBC president L.R. Scarborough asked that the history of the Broadus Gavel be entered into the official record of that year. That article is below.

When the Southern Baptist Convention assembled in Oklahoma City, May 17 1939, President Scarborough called the body to order with one of the historic gavels of America. On duty at sixty-eight of the eighty-four meetings of the Convention held in the District of Columbia and fifteen of the eighteen states of its territory, it has been used by seventeen of the twenty presidents during these ninety-four years. It is certainly the most notable Baptist gavel in the South, if not on the continent and in the world.

It was at the seventeenth meeting (twenty-seventh year) of the Convention in Raleigh, North Carolina, on May 9, 1872, that this interesting symbol of order was presented to the body. The honored president for seven years, Chancellor Patrick H. Mell, of the University of Georgia, was unable to be present on account of illness. The Convention chose as his successor Dr. James P. Boyce, President of the Southern Baptist Theological Seminary, then located at Greenville, South Carolina. After Dr. Boyce made a brief address on assuming the chair, one of his Seminary associates who had just returned from an extended trip to Europe and Palestine, came to the platform. What transpired is thus recorded in the Minutes of the session:

“Rev. J. A. Broadus, of South Carolina, presented to the Convention a mallet for the use of the President, which he had brought from Jerusalem for that purpose.”

The paragraph immediately following, though not quoted, seems to have been a part of the presentation speech of Dr. Broadus describing the gavel:

“Its handle is made of the balsam tree which grows by the River Jordan, forming a large part of that beautiful fringe of green trees which has always marked the banks of the sacred river, and beneath whose shade the multitudes looked on as the Saviour was baptized. The head is of olive wood, reminding us of the Mount of Olives, from which he ascended to heaven. This simple mallet thus suggests to us the beginning and the end of our Lord’s public work on earth.”

In a letter to his wife, written the same day (as quoted in his “Life and Letters”), Dr. Broadus said:

“Dr. Boyce was elected President on first ballot, by a considerable majority, Dr. Curry being next. He made a good address on taking the chair. … I presented Boyce the mallet, with a few words, and it was quite unexpected to find it exciting much interest.”

The broad silver band covering the handle near the head was not there when first presented to the Convention. It was during a rather stormy session that one of the presiding officers pounded the table so heavily to maintain order that he actually broke the slender and somewhat delicate handle. The Secretary being custodian of the gavel, Dr. Lansing Burrows had the handle repaired and restored by using a silver jacket on which were then engraved the following lines in script:

Brought from Jerusalem by Rev. John A. Broadus, D.D., LL.D., and presented by him to the Southern Baptist Convention at Raleigh, N. C., May 9, 1872. The head of olive wood from Jerusalem and the handle of balsam wood from the banks of the Jordan.

It is worthy of note that this gavel has been used by every President of the Convention except the first three, namely: Rev. Wm . B. Johnson, of South Carolina; Dr. R. B. C. Howell, of Virginia; and Dr. Richard Fuller, of Maryland. As just stated, it was presented to the Convention when Dr. Boyce was elected to the Presidency. For nine years he held it with distinction until he was succeeded by his predecessor, Dr. P. H. Mell, who was one of the greatest parliamentarians in the world. Dr. Mell’s second period of presidential service was eight years, a year longer than his first period; so that he served the Convention in this capacity fifteen years, which is half a decade longer than any other President ever occupied the chair. In 1889 the gavel passed into the hands of Judge Jonathan Haralson, of the Supreme Court of Alabama, and he held it with marked ability for ten years. Since 1899 the presidential terms (with two exceptions) have been just three years, Dr. Gambrell serving four years and Dr. Brown only one because of illness.

The historic gavel of 1872 thus passed successively to Hon. Wm. J. Northen, a leading layman and former Governor of Georgia; to Rev. James P. Eagle, former governor of Arkansas, who was a successful lawyer, farmer, and preacher; to Hon. E. W. Stevens, a foremost citizen and former governor of Missouri; to Hon. Joshua Levering, a prominent businessman of Baltimore and once prohibition candidate for the presidency of the United States, to Dr. Edwin C. Dargan, the distinguished preacher, theological teacher, and author, then of Georgia; to Dr. Lansing Burrows, the eminent Secretary, statistician and Christian statesman; to Dr. James B. Gambrell, widely recognized as the Baptist Commoner; to Dr. E. Y. Mullins, one of the world’s most eminent theologians; to Dr. George White McDaniel and Dr. Geo. W . Truett, two of the great preachers of our time; to Dr. W. J. McGlothlin, eminent scholar and university president; to Dr. Fred F. Brown, a foremost pastor (who however was prevented by sickness from presiding); to Dr. M. E. Dodd, preacher, author, traveler, denominational leader; to Dr. John R. Sampey, scholar in Old Testament Hebrew, Seminary president, authority in the field of Bible study through the Uniform Lessons; and now to Dr. Lee R. Scarborough, teacher of preachers, apostle of evangelism, author of vital volumes. These great men have been masters of assemblies, worthy of the confidence reposed in them, and worthy to preside over one of the greatest religious bodies on earth.

It may be added that during this period many distinguished Vice-Presidents—a hundred or more of them—have been called to the Chair, and with this gavel have kept the Convention in the path of parliamentary rectitude. This remarkable gavel has sounded the call to order for the Convention in every state of its territory except three—Arizona, New Mexico, and (southern) Illinois. It has seen service at one session in Mississippi; at two sessions in Oklahoma; at three sessions each in District of Columbia, Arkansas, Florida, and South Carolina; at four sessions each in Maryland and North Carolina; at five sessions each in Alabama, Louisiana, and Missouri; at seven sessions each in Virginia and Texas; at eight sessions in Kentucky; at ten sessions in Georgia; and at fourteen sessions in Tennessee, which is geographically the central state in the Convention. In other words, the mallet which Broadus brought from the Holy Land has been the emblem of parliamentary authority at sixty-eight annual meetings held in fifteen Southern States and the District of Columbia.

When President Boyce received this gavel at Raleigh in 1872, the Convention was comparatively a small body. Its book of numbers at that time showed only 8,378 churches with an aggregate membership of 730,400; and its gifts amounted to only about $70,000 for both Home and Foreign Missions. There were 288 messengers enrolled at that session of the Convention. Now the Convention has a constituency of 24,932 churches with a membership of 4,770,185, and its annual gifts to all causes aggregate more than $35,000,000. The marvelous growth of three-score years has been within sound of this gavel from the banks of the Jordan and the Mount of Olives.

The law that governs the gavel has been formulated by Southern Baptist leaders in accordance with the best parliamentary usages and with adaptation to religious bodies, particularly to those of democratic polity like that of the Baptists. The By-Laws of the Convention recognize two standard works—Mell’s Manual of Parliamentary Practice and Kerfoot’s Parliamentary Law—but specifies that “in cases where these authorities differ or for which they do not provide; the President shall exercise his discretion, subject to appeal to the Convention.”

There are thus four authorities—Mell, Kerfoot, the Chair, and the Convention—from which this gavel must derive its own authority as monitor of a great assembly.

If this gavel had the power to tell us what it has witnessed, we should be thrilled by its story. It has been on duty when great issues were being considered, when forensic giants held the floor, and when denominational leaders called to their comrades from the front line of the advancing army. As numberless points of order have been raised and all sorts of tangles rose to the surface, it has sent forth its sharp, decisive, imperious mandates in obedience to the parliamentary umpires in the chair. For more than the last quarter of the nineteenth century and more than the first third of the twentieth century its strokes have called together and inspirited and guided and concluded the deliberations of one of the largest and most influential of all religious bodies in the world.